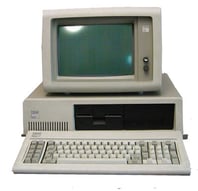 For most of us, it is nowadays hard to imagine life without personal computers (PCs).
The IBM PC (photo at left) was introduced in August 1981 and then helped reassure corporate customers that personal computing was serious.

However, most historians apparently agree that the personal computer revolution began in April 1977 at the first West Coast Computer Faire in California, where Steve Jobs introduced the Apple II, while rival Commodore unveiled its PET.

Both machines were designed for consumers. And in August that year, Tandy launched its competing TRS-80. But software for these machines was largely limited to games and a few programming tools.

So, IBM did not invent the desktop computer. But when having a PC software created in cooperation with young Bill Gates and his newly established company Microsoft, combined with the IBM brand, world famous as computer maker at that time, it became another revolution in computing, though few realized it at the time.

Soon, the world began embracing little computers by the millions, with IBM dominating the sales. PCs vastly expanded the number of people and organizations that used computers IBM’s essential contributions were to position the technology as suitable for wide use and to set a technology standard. Rivals were compelled to meet a demand that they had all grossly underestimated. As such, IBM had a greater effect on the PC’s acceptance than did Apple, Compaq, Dell, and even Microsoft.

Despite this initial dominance, by 1986 the IBM PC was no longer considered extraordinary. From IBM’s perspective, a new and vast market quickly turned into an ugly battleground with many rivals.

Eventually, IBM decided to drop their PC business, and 2005 sold it to the Chinese computer maker Lenovo Group.

Further information may be seen here.

* This article was originally published on IEEE Spectrum dated on 21st July,2021 and written by JAMES W. CORTADA

* This blog is edited by Trond Sollie

END_OF_DOCUMENT_TOKEN_TO_BE_REPLACED

Implementing the Common criteria for cybersecurity evaluation of IT product